After dinner the men were given 30 minutes to create their Squad Flag. Each of the five squads worked as a team to create a flag that would represent them during Operation Men of Valor. Below you can see two of those squads with their flags. We met back up around the campfire as each squad described their flag and explained the meaning behind each symbol on their flag. Pastor Danny challenged each squad to always have their flag with them throughout the event. They did a fantastic job of meeting that challenge. 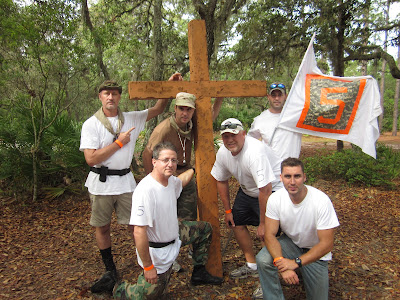 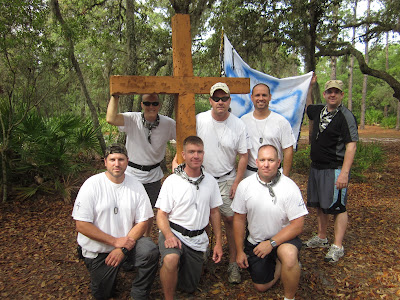 Next came Session 2 Life of Valor video: "Know Your Code". The former Navy SEALs did an excellent job creating these videos. After the video each squad gathered together to discuss the topic and complete the corresponding section in their Field Manual. Then the squads broke-up so that each individual could spent some time seeking God.

Then it was time for the Squad Activity: Mine Field in the dark... and in the rain. It was truly amazing that we only encountered about 1 hour of light rain while major thunderstorms were all around us in the surrounding cities. We would warn the men that heavy storms were heading our way. Then Danny & I would watch on our smart phones as the storms would dissipate just as they reached us or the storm would part in two and go around us. Our jaws kept dropping as we would warn the men... and the major storms never came. There was one report of thousands of lightning strikes in the surrounding cities. Glory to God for His hand of protection throughout our event.

As for Mine Field, a series of disc cones ("landmines") numbered from 1-24 are randomly placed inside a circular boundary. In order to diffuse the landmines each squad is to touch every cone in numerical order from 1-24 and get back across the start/finish line in less than 90 seconds. The only catch is that only 1 person is allowed inside the circle at a time and the cones cannot be moved in any way. If either of those rules were ever broken the clock stopped and their round ended. To make things a little more interesting God added the darkness and a little bit of rain to increase the difficulty. Each squad was allowed to use their flashlights. It sounds like an easy task, but it's pretty challenging. It was a great time as we watched each squad work together as a team to diffuse the landmines and "save the world". They had multiple opportunities so they learned from their mistakes and from observing other squads. They had to communicate well together and develop an effective strategy in order to accomplish the task. I love this simple game because there are actually many life lessons to be gleaned if we take the time to connect the dots... and we did just that.

Once Mine Field was complete we returned back to the briefing area for Session 3: "Know Your Enemy". It was another powerful squad time & individual time to seek God.

We finished up the night with a powerful testimony by one of the men named Jeff. He shared his heart and some potent lessons God has taught him. At midnight the men were dismissed to go to bed. It was a good day.