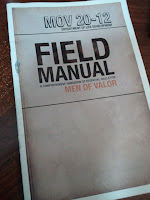 Part 2 - BRIEFING, PHYSICAL, TRAINING & SQUADS: Since this was a Top Secret Mission the men who signed up for this event didn't know exactly what they would be doing or where they would be going. They arrived at Calvary Baptist Church of Clearwater on Friday, April 20th at 2pm. Having received only general information, 32 men arrived with their overnight supplies and 2 one-gallon jugs of water.

At 2:15pm the Drill Sergeants arrived to man specific stations. Four registration tables were set-up where each man received a personalized dog tag, white T-shirt, & a camouflage bandana. Each man received a mock physical to help set the tone for the pending event. The entire group was then broken down into 5 smaller squads and given Squad Leaders. The squads were trained to form-up in 3 x 3 formation. Upon formation Pastor Danny informed the men that they were about to be challenged physically, spiritually, and emotionally and at times this mission would not be easy, but that they would find out what they were made of. Just like the Navy SEALs leave no man behind, it would be the same on this mission. Each man was instructed to "Go Dark" and turn off all cell phones & technology based gadgets. They then watched the following 4 minute video by Life of Valor and were challenged to either continue on this mission or quit now.