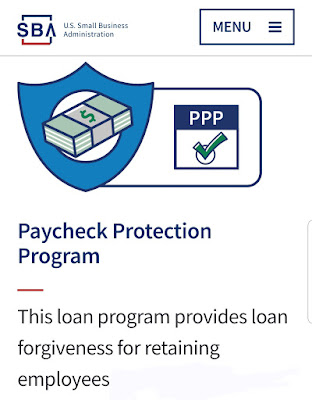 One of the biggest tasks I've been able to tackle over the past 6 weeks is applying for & locking in GTD's PPP (Paycheck Protection Program) forgivable federal loan.

I'm happy to report that GTD was approved for and has already received our PPP.

Once it became apparent that several of our groups were going to have to cancel their upcoming group adventures specifically because of the government shutdown of public gatherings I began the application process for the PPP.

I put a lot of research into finding out what the best approach was for increasing our probabilities of getting approved for the PPP. I started with prayer and God reminded me of the book of Nehemiah and how God funded the rebuilding of the walls through the government.

I went on to follow the advice of many news articles, bloggers, and even my bank by applying for the PPP through several small banks, credit unions, & lenders. While the banks took the applications on a first come, first serve basis it was the lenders who could pick & choose which applications to service first... and some lenders were caught favoring bigger businesses to increase their own bottom line. Since our PPP was less than $12,000 there was a good possibility that we would be overlooked by some lenders. So applying through multiple banks & lenders became the prudent choice. It was time consuming, but that advice paid off.

My original application was through an account I rarely use at Achieva Credit Union. After 3 days I received a voicemail that Achieva was overwhelmed with applications and wouldn't be able to service my PPP request. Good thing I didn't put all my eggs in that basket because I would have lost 3 days in the race to acquire the PPP before the funds ran out again. I applied through 3 other banks and lenders. It was a great thing that I had just completed updating all of our finances for the past 7 months because they needed most of that data to move forward with the application.

Each application took about 3-4 hours to complete, and then the waiting game began... as well as the silence. Since the SBA is trying to field the equivalent of 14 years worth of loan applications in a matter of a couple of months it's understandable that communication will be scarce, but that makes the entire process borderline brutal. The applicant has very little to work with... usually just a confirmation email that your application was received. Then silence, more silence, and even more silence. It becomes crucial to check your emails, voicemails, and lender websites at least every 2 hours so that when that rare movement happens you are ready to respond. Usually they are seeking more data or information to move forward with the application process. It's very time consuming and intrusive to the momentum of the work day, but it's a small price to pay in order to lock in your organization's PPP.

From start to finish it took 13 days from the initial application to receiving the funds. All in all our PPP journey was very positive. The lenders I worked with were very helpful as the process progressed. It was all done electronically online. It took about 3 full days to get the initial applications in and follow-up with the initial requirements. After that it was just a constant checking up for any movement. Once there was movement then the momentum picked up until the closing happened and the funds were transferred.

For us the PPP is one part of navigating the setbacks to our events. Hopefully it will fill in the gaps from the revenues lost from the events that were lost.

All in all we are doing good, and much of that is because of our incredible faithful supporters  - which is the subject of an upcoming update.

Thank you for following GTD and our journey through COVID-19 in our 24th year of ministry.

We are thankful and full of faith & confidence in Christ =)