YOU DON'T WANT TO MISS THIS! ...BLINDNESS HAS NOT STOPPED HIM! 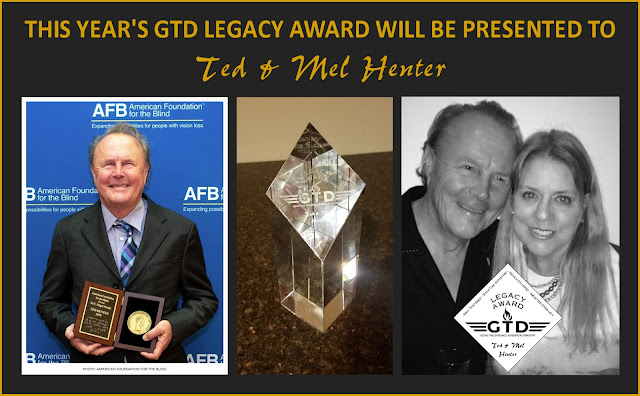 YOU DON'T WANT TO MISS THIS!
...BLINDNESS HAS NOT STOPPED HIM!
....WATER SKIING, PADDLING THRU THE PANAMA CANAL...
.....DEVELOPING SOFTWARE THAT CHANGED THE WORLD...
......AND ONE OF GTD'S TOP SUPPORTERS OF ALL TIME!!!
.......TED & MEL HENTER TO RECEIVE GTD'S LEGACY AWARD THIS TUESDAY NIGHT!

I could talk for hours about Ted & Mel Henter! They are amazing! God has significantly used them to help build this ministry! Ted used to race motorcycles professionally. Then he went blind in a car accident. And he never looked back. God used Ted & Mel Henter to impact the world from a car accident that changed their lives forever. Their support for GTD over the past 17 years is almost indescribable and it qualifies them for our rarest award... GTD's "Hall of Fame Award"... A 2 lbs chunk of crystal we call the GTD LEGACY Award. Ted & Mel will share their story on Tuesday night. It's all about overcoming the obstacles and going the distance. It will inspire you. It will impact your life!

Join us for our Annual Banquet THIS TUESDAY NIGHT, Nov 19th, at the Central Park Performing Arts Center in Largo, Florida, from 6:30pm to 9:00pm for a wonderful night of inspiration!!


PS: If you can't make it to the banquet you can read about Ted & Mel's inspiring story here