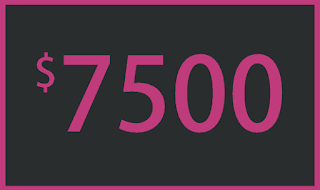 A VERY GENEROUS local charitable foundation has made a $7500 year-end donation to GTD!!!

We are humbly overjoyed. We are in uncharted territory. This is $10k more than we've ever raised. It's not only an overwhelming show of support from our Ministry Family, but an indisputable display of strong support by the very hand of God. I can't quite describe how that fact alone profoundly impacts us. Deep humility. Overflowing joy. Quiet abounding confidence. Exuberant invigoration. The list goes on.

This has been an epic David & Goliath type of year. The first half of 2017 was a sucker punch to the gut followed by an upper-cut to the jaw from Goliath sized set-backs. We were knocked down, but not knocked out. This kind of fight only ends with a tap-out or death. We wouldn't tap-out. We wouldn't die. We kept rising back up and fighting back. I had been here before so I could draw from experience and a developed faith that was up for the fight. But I was physically worn out. Laurie was exhausted & burned out. But still we fought on. I sought God for His intervention and rescue. There's an old saying that goes like this, "Give a man a fish and he eats for a day. Teach a man to fish and he eats for a lifetime." I was seeking God for a fish. He was more interested in teaching me a life lesson. His lesson to me, "You are a winner, but you're not a champion. You have the discipline of a winner, but you don't have the discipline of a champion." That truth changed my life. That truth set me free. From that moment (at the beginning of last summer) I've wholeheartedly obeyed His instructions to me. I've been on an amazing journey of developing a champion's level of discipline. I'm not completely there yet, but I'm "approaching the green" (to use a golf metaphor). It's not an overbearing "military dad" type of discipline. It's a life-producing, life-preserving wise discipline. It's not boring at all. In fact, I can't stop talking about it.

So what does that have to do with fundraising? Nothing. And EVERYTHING. When our hearts are completely God's, He strongly supports us.

The year is ending much differently than it began. Goliath has been slayed. Our mourning has been changed to dancing. Our exhaustion has been changed to exhilaration. Our heavy hearts now freely rejoice. This has been a comeback story that will forever change the trajectory of this ministry and our very lives. We have so many people to thank... people who never gave up on us... people who saw the need and took the initiative. God used you to strongly support this ministry and us. We praise God for Him. And we praise God for YOU!

THANK YOU SO MUCH!! GOD BLESS YOU!

"For the eyes of the LORD move to and fro throughout the earth that He may strongly support those whose heart is completely His." - 2 Chronicles 16:9