There are very few easy victories in life. No matter what your honorable pursuit is it will be met with fierce opposition - whether the opposition is from your own avoidance of pain or self sabotaging emotions or an undisciplined mindset or a lifestyle of foolishness - whether it's from an environment surrounding you of low standards, mediocrity, and complaining attitudes - whether it's the devil himself and his minions of dark spiritual forces scheming for your discouragement, depression, and destruction - whether it's a history of poor choices, major setbacks, or inherited generational sins - whether it's Murphy's Law, a malfunctioning alarm clock, or an unexpected health ailment - the reality is that EVERYDAY opposition attempts to rob you of your future by defeating your present. So what do you do? Roll over in your bed? Hide under the covers? Drift with the current? No! You FIGHT! You anticipate daily oppositions from every direction and even the enemy within and you develop a WARRIOR'S mentality. You learn to love to FIGHT! You live for the FIGHT! You run to the FIGHT! Every night is FIGHT NIGHT! You FIGHT for every inch of progress. As you train yourself to become a 24/7 vigilant fighter something amazing begins to happen. You stop losing and you start winning. The wins start mounting. You stay humble knowing you are just one foolish decision away from being defeated. And fight after fight after fight you become who God made you to be. You become more than a conqueror. And you keep running back into the arena for the next opponent, the next fight. Does it ever get easy? NEVER! But FIGHTERS don't want it easy!! You have to have a mentality that matches reality. Life is a NON-STOP FIGHT. You FIGHT or you die. For too many people life is just a long drawn out dying process. Don't tap out! Answer the bell! Your alarm clock is the bell! Rise & FIGHT!!!

"Fight the good fight of the faith. Take hold of the eternal life to which you were called when you made your good confession in the presence of many witnesses." - 1 Timothy 6:12 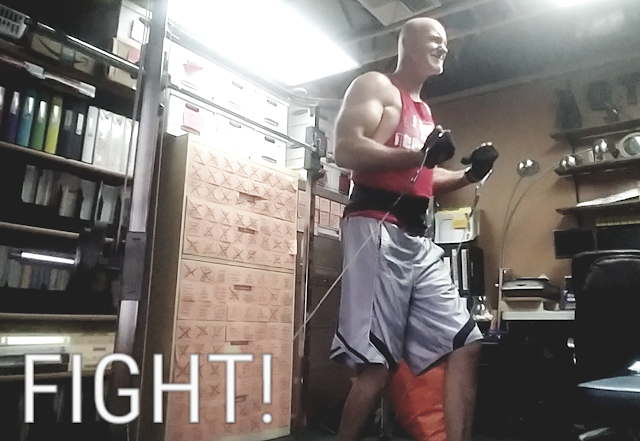