It may only last for 1 minute, but my inbox is finally empty!! It took 3 months of diligent work while managing my other responsibilities, but I acted on, replied back to, sorted, filed, and/or purged 3500+ emails that had piled up in my inbox over the past 18 months (and a few of them had been flagged dating back as far as 2012). I know it's not a very exciting post to read, but I can't tell you the joy I'm feeling at accomplishing this task (that actually led to hundreds of other tasks). With so many forms of communication such as facebook posts, fb messenger, tweets, text messages, phone calls, voicemails, face-to-face meetings, and letters... it's understandable that I'm going to fall behind on emails, especially while I'm traveling off the grid so much... it's nearly impossible to stay on top of everything. But now I'm back on top of one of my least favorite forms of communication - emails. And now I have a better system in place to help keep me on top. It's such a liberating feeling to get that monkey off my back! Thank you Jesus! Bring on the next big task!!! 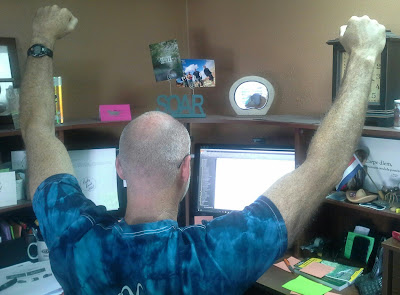